“Thanks be to God who always leads us in triumphal procession in Christ and through us spread everywhere the fragrance of the knowledge of Him” 2Cor. 2:14. Praise the Lord!!!

Our God has been so good to us in many ways. The second wave of Virus pandemic was more than serious. But God has protected us and no one of our members is counted missing. We are grateful to HIM.  A lot of development has come on. Glory is to His name.

Our God has been so good to us since reopening of schools in January. There is  a lot of progress as far as academic work is concern.    COVID PROTOCOLS are being observed: Social Distancing, washing of hands, temperature taking every morning and wearing of mask and others.

Temperature taking every morning and wearing of mask and others.

a. SCHOOL BUS BREAK DOWN

In early April before we vacated our school bus broke down with a pump problem. We manage to fix it during the vacation.  We re-opened on the 4th of May. During the second week we again had an Engine problem. So we have to change the bearings and pistons. It took us two weeks to fix it . During this time we have to hire a commercial car to pick the children to and from school every day. It was an unexpected challenge. The school management secured a loan to take care of the bus and within two weeks the bus came back to work. Praise the Lord!

During the third weekend of this term (  i. e. third week in May), thieves broke into one of our classrooms and took away books belonging to the pupils in the school.. Management has fixed the broken space. The Parent and Teachers Association have decided to help buy the books for the children. We are praying for the best.

As at last quarter our enrolment was 73.  . We have had 4 admissions so far making our enrolment 77 now. We are happy with the numerical growth. Academic work is improving and the parents are happy.

By God’s grace we have had a new teacher for K.G 2 who is in the person of Latifa Apuri

Latifa is a woman of three children who graduated from high school in 2014. She has since being teaching at one of the private schools in the municipality. She lost her job during school closure due to Covid. 19 in 2020. When school re-opened she was not accepted in her school again. She applied to our school in May and after the interview, she was accepted.

Latifa teaches with enthusiasm and the children like her. 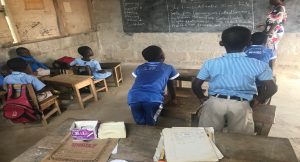 Dr Skinner read about Run Mission International Volunteering Opportunity on Idealist.org and shown interest to teach the little children who were staying home during school closure due to COVID 19 Pandemic.

Since September she has been teaching at least one hour a week for free through Whatshapp video call.

Even during the Easter break she continued teaching till now. She has imparted knowledge in the children’s life. Dr Skinner loves these children and can now call them by their names. Jesus said in John chapter 10 “I know my sheep and my sheep knows me.”

Dr. Skinner is happily teaching almost every week. Her passion is to teach children to read, write and speak good English.  Her dedication, sacrifice and service have propelled the children to a very high level. There has been a great impact on the children’s life and studies. She has taught a lot of English words, pronunciations and their meaning. They can now speak good English and construct sentences. 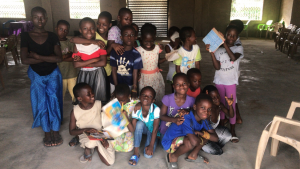 B. ATRONIE IN THE BONO REGION

Praise God for the wonderful thing He has done. In August 2020 we planted a Church at Atronie in the Bono Region of Ghana. Even though Corona was everywhere, the Lord led us to start a church there. Pastor David Amoako was appointed to Pastor the Church.

Even though 51 people gave their lives to Christ at our house to house evangelism and at the crusade ,only three people came to Church on the first Sunday service. Pastor David was encouraged to make a follow up on the converts. As at March 28 we have a membership of 22. Praise the Lord!!!.

The Lord is building His Church. Leadership training has started to help them to take responsibilities. Pastor David’s dedication and sacrifice has brought the Church to this far. Praise the Lord!!!

On the 30th of April to 3rd of May a team of three from the national board visited the Church. They had a film show crusade to revive the Church. The Church welcomed the team with great joy. Two people gave their lives to Christ at the crusade and joined us on Sunday            On the 2nd May. 2021 we had a life application service with the Church and 22 people were in attendance. The team bought a report to the board meeting and a decision was made to Post Pastor David and his family to Atronie. All these times Pastor David has been going to Atronie every week from Offinso to take care of the Church. Now he and his family are going to stay there. On the 20th June the Church organized a sendoff service at Offinso to raise some fund to support his  new settlement. 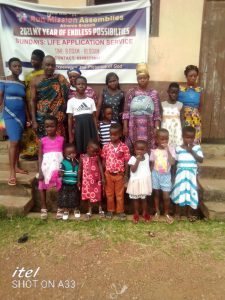 We are now looking for a plot of Land for a Chapel since meeting place is a challenge as the number grows larger. We need your prayer support.

In late April we had a leadership seminar on discipleship. This became necessary when we observed that our discipleship class was going down. We did this to strengthening our Sunday School and discipleship strategies all over. We spent three days at Kasoa for the district. The participants were very happy to receive the message, especially strategies for a follow ups. God in His own wisdom opened our mind through this seminar. After one month of implementation, we saw it as very effective. We had a similar Seminar at Offinso. It is working effectively Praise the Lord!!!

As we know cleanliness is next to holiness. We  began a project in the community to bring neatness to our doorsteps. This time we involve many of our stakeholders. The kings, the Muslim community, the Municipal Assembly and local government, all Churches and schools. We made a community own projects so that nobody will litter around.

A. A survey was made to identify the challenges, the effects on the communities and possible solutions. Stakeholders meeting was organized to explain the project to them.

B. The stakeholders embraced the projects and committed themselves to work at it.

STRATEGIES TO MAKE IT A COMMUNITY OWN PROJECT

1.            We  proposed and showed films of how the environmental hazard causes health problem and kills us early in life. 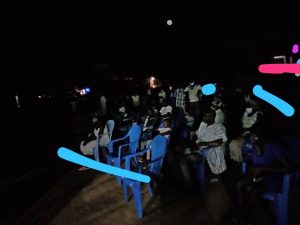 Pastors and Church leaders educated their congregation on our environment

LAUNCHING OF THE PROJECT

We took about three month to prepare and educate people beginning from December 15, 2020. We showed films in the community parks, Churches and Mosques to educate the citizens. The actual launching was on 20th March 2021.  We cleaned all our garters, weeded the environment, and remove the refuse which has been dumped wrongly and others. We made cards and wrote an inscription on them and walk through the town to create awareness of the importance of cleanliness. The theme for the project was “THE ENVIRONMENT, MY RESPONSIBILITY”

For the project to be sustained we planned to make it every month. It could not work because during the 2nd and 3rd one many went to their farms and others to funerals. We  then reorganized ourselves to make it every six weeks on the traditional calendar(Saturday Dapaa). On the traditional calendar we do not go to farm. Neither do we organize funerals. So the 4th Clean up fell on Saturday 26th June, 2021. It was very effective. Praise the Lord. 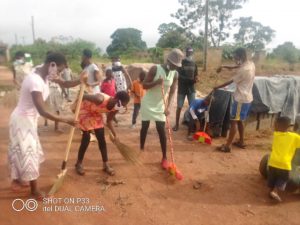 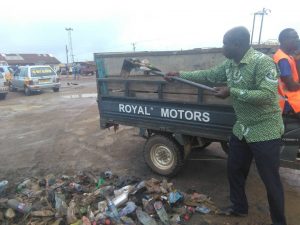 Green Ghana Project is a project by the Government of Ghana to plant 5 million trees a day. Most churches have taken this initiative to make the vision of the President come true and Run Mission Assemblies is part. This is because there has been an environmental degradation activities in Ghana. Unauthorized mining and tree cutting activities is pushing us more into the desert. To restore the situation tree planting is the way.

So far we have planted about 1000 trees in our farms, streets and our homes. 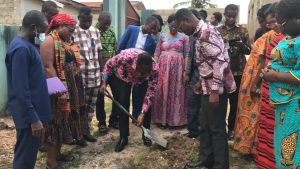 Sister Mercy Owusu is a member of the Offinso. She has three children. Two girls and a boy. The boy is the oldest. The younger girl is about 4 years old.  Sister Mercy is a baker.  On the 27th April Sister Mercy was baking bread when her younger daughter requested money to buy fried yam. On her way back home she was kidnapped. Four days later a boy who had attempted to threaten a small boy of 8 years( two weeks prior to the day) was suspected and was arrested. He accepted the case and showed where he has buried the child. When the Police went to the scene the HEAD had been cut off and has taking some part off buried the rest.  After a postmortem the child has been re-buried and the murderer is still in Police custody helping the investigation. 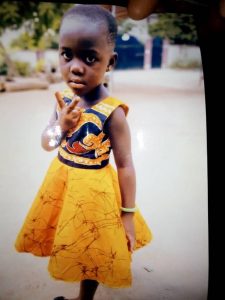 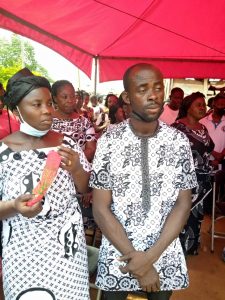 Three years ago Mrs Agyei got pregnant . She was diagnosed to have Hepatitis B . It was likely the baby could be having the disease. We prayed to God to intervene. Mrs Agyei has been healed , the Baby was free from the disease. After a series of test and examination the child is free.  Thank God the boy is two years now