“Thanks be to God who always leads us in triumphal procession in Christ and through us spread everywhere the fragrance of the knowledge of Him” 2Cor. 2:14.

Our God has been so good to us in many mysterious ways. Corona came everywhere but God has protected us and no one of our members is counted missing. We are grateful to HIM.

During the locked down of Covid -19 Pandemic in March 2020 which resulted in seizer of public gathering the Church has been indoors for far too long. When the Government of Ghana opened the windows half way, as we observed all the safety precautionary measures, we thank the Lord for his kindness and protection.

The district youth executives came up with a program to strengthen the youth to rise up from its slumber. The camp was code named “BE STRONG IN THE LORD”(EPH.6:10). It was aided at imparting, transforming and producing youth with integrity for the Church in the 21st Century. The program started from Thursday20th to Sunday 23rd August,2020.

During the four days program we were blessed in no small way as the Lord poured out bountiful blessings upon us. The surrounding communities were also not left out as the Lord lifted His hand to heal the sick, deliver those oppressed by demons; many young persons were won to the Lord as they gave their lives to Christ.

The Akokoasa branch who hosted the program demonstrated a selfless and communal spirit worthy of emulation. In spite of the economic hardship Corona has brought worldwide, they bore all the housing, feeding and bedding expenses.

One of our brothers named Isaac Sapaako Agyeman who spearheaded the program brought in some youth from Accra Scripture Union who joined hands in soul winning agenda as they brought evangelism tracts and other Christian literature to fuel the program. Indeed it was very powerful.

Speaker were drawn from within the district and some other motivational speakers from elsewhere who performed credibly to the glory of the Lord. Some spoke on how to prepare to handle the mantle of leadership, how to secure the future in the global economy, how to focus on their educational pursuit to be marketable in the world of business and how to gain entrepreneurial skills and many more.

They went into the surrounding villages to evangelize them and shared their experiences in the Christian faith with them. They also shared some second- hand clothing they gathered from among themselves and others among the villagers.

A similar program went off at Offinso . The youth in the district encamped at Twumasen for the 4 days. The Lord brought a great revival among the youth. Evangelism was made to win more youth to the glory of God.  At the end of the program 3 people gave their lives to CHRIST and many more that were sleeping were awaken. 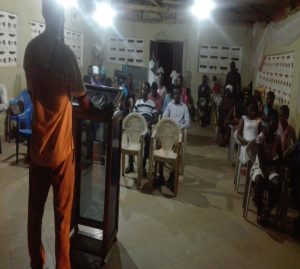 B. TWO NEW BRANCH HAS BEEN STARTED

(a). A MISSION SURVEY AT ATRONIE –BONO REGION

MISSION : A survey for a possible Church planting at Atronie.

NAME OF THE VILLAGE: ATRONIE

The founding fathers of Atronie migrated from Akyem  Kyereso in the Eastern Region of Ghana . They first came to Kumasi as pilgrims and rested at Adum.  Adumhene help them and gave them a place to stay. Since their major occupation was hunting, that business lead them to Potrikrom near  Adugyama on the Kumasi to Sunyani road. They were hunting and sending their catch to Kumasi for sale.

They went farther and found a thick forest where they had a lot of animals particularly African Buffalo. The hunting business grow that they had a lot of produce. They then thought it wise to settle in this forest. They found two rivers in the area one called Amamagya and the other Momoe.  Not knowing it is because of these two rivers that the buffalos come to drink.  So they hide the rivers and kill many of these animals. In their local dialect they call the buffalo ATROMO. One day when they went to the river side they saw a lot of the buffalo so they shouted “EI ATROMO NIE”. Meaning : what a buffalo. So they named the place ATRONIE, because they had a lot of buffalo. When they meet their fellow hunter they tell them we are staying at where there are many buffalos.

They believe in their ancestral gods. In other words they believe that there are spiritual beings in the rivers that guide and protect them. So they have dedicated Fridays as the day of worship to the gods and they do not work on the land.

CULTURAL BACKGROUND: Since during their pilgrimage they rested more in the Ashanti stool land they live like the Ashanti.(A) food- They eat Fufu (b) dress with clothes like the Ashantis (c) They exchange greeting and pay bride price when they want to marry.

OCCUPATION: They are predominantly farmers and hunters.  Currently some of them are miners after they discovered that there is Gold on their land. Others are alcohol distillers.

They are lazy gluttons and always want to be spoon fed. They are also stubborn people who want to fight but afraid of the Policeman. When they commit crime they will run away to the city say Kumasi or Accra to find some menial job to do. Most of these people are the Shoe shine boys, street boys who sell dog chains and yoghurt in the traffic and haircuts.

Majority of the women are single parent, women headed and single mothers.

Formally they did not have interest in education but praise God some few Churches have brought Christ to them who opened their eyes. Christ has brought light to them and now some are serious in education.

There is a strong Chieftaincy dispute in the village. They have two Chiefs instead of one. All the two claim to own the village. Due to this the gold on the land which NEWMOND MINING COMPANY discovered cannot be mined. This must be settled so that the land can be given for mining to remove poverty in the village. That is their prayer.

The founding fathers worshipped the gods of the land. But as at now there are about 9 churches in the village. There are other religion like Islam, Jehovah’s witnesses and some occult churches.

On the 19th to 23rd of August, a team of 9 people went for the Church to begin. Our strategy was to saturate the village with the word of God. So we had three major programs in a day.  Market preaching , house to house evangelism and evening film crusade. As at 22nd August, 51 people have given their lives to Christ. The first service begun on Sunday 23rd August but due to corona virus we are meeting in Home cells. Pastor David Amoako has been appointed to Pastor the Church. Praise the Lord. 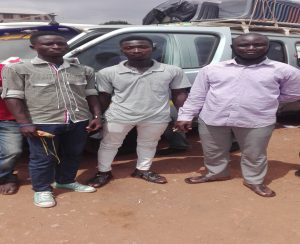 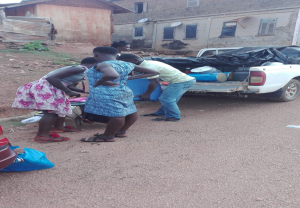 A new branch has been started at where the Swedru Chapel is being built. This is a new settlement area which is outskirt of the Swedru Township. The place is called “Botwe Estate” We have started a fellowship in my new house as work on the temple is in progress. We are raising a structure for the children Sunday school who are increasingly coming every Sunday.  The place is far from Swedru town and some people in the community have expressed an interest to join our Church. After all it is the same God of the Bible. We are worshipping but they are waiting for the completion of the temple. The place is fast growing and rapidly developing. Some young people have started invading the place with marijuana smoking and some suspicious characters. I believe the Lord has brought us here to impact and affect the youth with the gospel of Jesus Christ. To bring them out of the kingdom of darkness to the kingdom of light. To open the eyes of the spiritual blindness and that they receive forgiveness of sin from the Lord. I and my wife have started cultivating garden eggs, pepper and tomatoes to support the work on the Temple. We need financial support. The few members we have are poor. Some even depend on us to feed their families. We are calling on people whose heart the Lord will touch to come to our aid to support us build the Temple to save lives.

Victoria is a 22 year old lady who is a teacher by profession. She is single and from the Offinso branch. She is a very dedicated lady who is serous with the work of God. All of a sudden she had a medical problem in the abdomen and was surgically operated. One week later her situation became worse. Not knowing during the surgery there was a cut in her urinary bladder and the urine could not be controlled. Victoria thought she would die and even prayed that the Lord should kill her. After some time of prayer and counseling she was encouraged. The doctors took her to the theater again and resolve the problem. By God’s grace victoria has been completely healed. Praise the Lord.